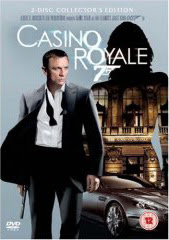 Well, I've finally watched the new James Bond movie... months and months after most people, of course, but I can't remember the last time I actually went to the pictures. I always wait until the DVDs come out...

I am very impressed with Daniel Craig as Bond. Which isn't what I expected. I was quite fond of Pierce... I thought he was the best bond since Sean and I really wanted to see him continue in the role. When I heard he was passing on it, I must admit that I then wanted it to be Clive Owen, because he's got the 007 look somehow... I was shocked when I heard it was DC... and I just didn't see him as Bond, because of the hair, I suppose, although I'd seen him on the telly and in films and rated him as an actor. But he's great! He's a rough, craggy, rambunctious Bond, forever getting bloody and battered... and really very, very cold at times, in a totally appropriate and very ruthlessly sexy way. I like it that he's a universe away from the burlesque Bond of Roger Moore, although I enjoyed the Moore Bond movies in a comedy relief sort of way. There was nothing of the Bond books in those movies, but there is in the new version of Casino Royale in an updated sort of way. Although I think there's slightly more humour in the books somehow... Book Bond can be quite droll at times, but DC's Bond is more sardonically humorous in a very hardcase and bitter way. I also liked the judicious and relevant use of modern technology. It's utilised in a very real world sort of way, a bit like it is in the Bourne movies. [I do love Bourne... and Matt Damon is faberooney... but he's just that bit too pretty for a deadly killer... although maybe that makes him a more effective deadly killer, 'cos you don't expect it!]

What I'd like to see sometime is a remake of On Her Majesty's Secret Service with Daniel Craig as Bond. Sorry, George L. but you were never Bond for me [and for a lot of folk, I guess] and that's a shame, because the story was very good, with more scope for exploring the emotional side of Bond.

ps. don't forget to slide over to Lustbites and comment, eh?

pps. lisaf... where are you? There's a prize with your name on it if you send me your snail mail addie!!!

I was rather partial to Pierce too... and kinda gutted the gorgeous Clive Owen was looked over. I actually watched the Daniel Craig one on a flight... but what was with the pout... yuck!!! although the cool blue eyes did make up for it.

No George was never a Bond... big big error of casting there.

Of course my ultimate dream would be vdo as bond... but for my eyes only!