... that there's been this gap. I haven't been really ill or anything, and nothing particularly drastic has happened. It's just that the Easter Holidays and this occasional 'disconnect' thing of mine has really shaken me out of my usual routine of writing and posting and whatnot. I think all that promo stuff really freaked me out... I've done some of it, and prepped some of the rest of it, but it really really drags me out of my writing 'place' and I'm finding it bloody tough trying to get back into it!

Well, a lot of Easter was spent watching Agatha Christie stuff on ITV3... lots of Poirot, Marple and stuff about Christie herself. I'm not a crime writer, and I never shall be, but some of the insights into what makes her writing so compelling were quite interesting, with possible applications to other kinds of writing.

I haven't read any Christie recently, in fact I probably only read one or two way back when I was in my early teens, but I'm tempted to try some, just to see how they read nowadays... I have a copy of Evil Under The Sun somewhere in my TBR pile, which I bought because I was interested in its setting The Burgh Island Hotel, but so far I haven't really dipped into it.

On the subject of investigations and crime fiction... I enjoyed the last ever Life On Mars last night, and have even found myself snivelling a bit today over the ending. Of course, it's still open to interpretation, but I thought it was beautiful how Sam finally realised exactly where/when he really felt happiest and most alive... and made his choice. 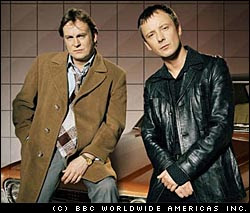 LOM has been a very rare and unusual television event, and I think it will be a while before somebody comes up with something as novel again. Puts me in awe of the creative mind that can have such an audacious fiction idea and then flesh it out in such a coherent yet enigmatic way.

Amongst many of the virtuoso procrastination techniques I've been employing is fiddling with Blogger again... Please note the new header for this blog! It's just a first attempt, but at least I've worked out how to do it, with the help of the Testing Blogger Beta Blog, which has lots and lots of useful information! If you're wanting to fiddle with Blogger and 'do stuff' to it, check it out!


Don't forget Portia's Promos - new stuff being added all the time!
Posted by Portia Da Costa at 11:43 am

I love anything Agatha Christie, too. Evil under the Sun happens to be one of my faves! I haven't read any lately, either. Have to rememdy that.

I wish I'd seen the programme about AC herself. The films are something I don't plan to watch again, but once they're on I have to! :) Good to see you back on line.