All the Accidentals, together at last! 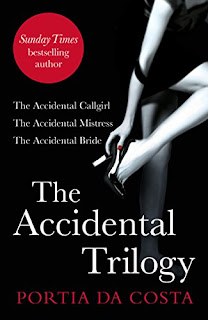 "The passionate love story of independent off-beat Lizzie and her gorgeous multi-millionaire, John Smith, every woman's idea of the sexy older man."

From being mistaken for an escort...

When Lizzie Aitchison meets John Smith in the Lawns Bar of the Waverley Grange Hotel she doesn't realise at first that he thinks she's "working". The chemistry between them is dynamite from the very first glance exchanged across the room, and she can't resist the allure of his fallen angel face and the way his lean body looks in a sharp business suit. Pretty soon, she's playing a dangerous game with him. John's a no nonsense guy who seems to be set on engaging an escort for sex rather than simply meeting a pretty girl to chat up in a bar, and if that's the only way she can get this gorgeous, irresistible man, Lizzie decides to act the part. Over just one drink, she becomes "Bettie", the high class call girl...

To agreeing to live with the man she loves...


Having met under unusual circumstances when he first mistook her for a high class call-girl, Lizzie Aitchison is now enjoying a passionate relationship with brooding multi-millionaire, John Smith.

However, haunted by the demons of a past he won't talk about, John seems unable to offer her more than a no-strings-attached affair. Generous to a fault, he still holds his secrets close.

Can Lizzie pierce his emotional armour, or will she never be anything more than a rich man's mistress?

To taking the ultimate step, and wearing his ring...


Now living together, Lizzie and John enjoy a state of blissfully uncomplicated pleasure, and an increasingly tumultuous sex life in their luxurious new home. Physically they're a perfect, loving match...

But John is still a man of emotional secrets, and when an old flame from the past turns up unannounced, his and Lizzie's relationship is suddenly thrown into question... even though he's asked her to marry him and join his aristocratic family.

Despite his proposal, Lizzie still finds it difficult to tell exactly where John's heart really lies and whether he's able to abandon the past and start anew. In the craziest of circumstances, she accidentally fell in love with him... but will it be just as easy to accidentally lose him?

The entire steamy, emotional saga in one juicy hit is now available from: